CI Labs is a preconfigured Ubuntu vm that can be accessed through RDP. It has preinstalled CI Fuzz and includes a test project that makes you able to try the workflow of fuzzing with CI Fuzz without installing anything on your device.

Get in touch with us to receive the IP address and credentials that will be used to log in: https://page.code-intelligence.com/ci-labs/get-access.

There is only one requirement to have an RDP client installed.

On Linux, you can for example use desktop : 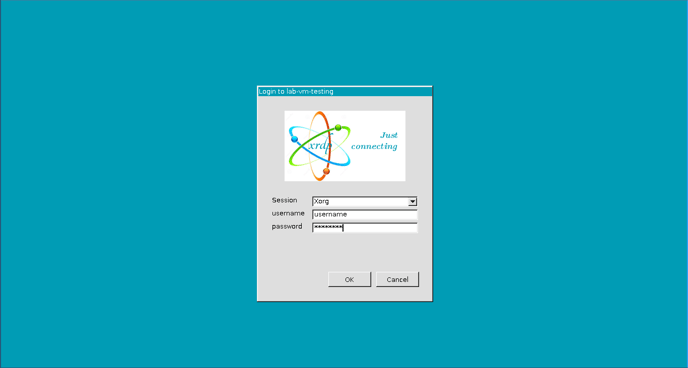 This article is a step-by-step manual on how to use CI Fuzz testing to find CVE-2021-27799, a stack buffer overflow in the ZINT Barcode Generator. It demonstrates the workflow of setting up fuzzing for a new project and writing fuzz tests.

After logging in into CI-Labs using your RDP credentials, open the folder "zint-code" in VS Code. 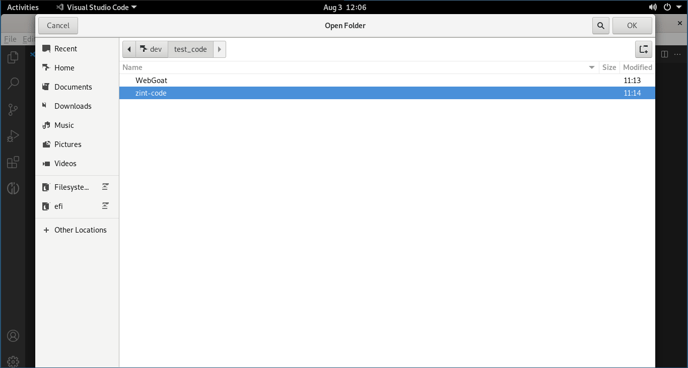 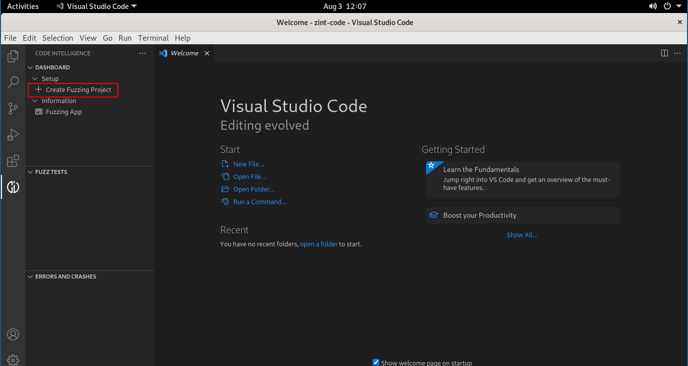 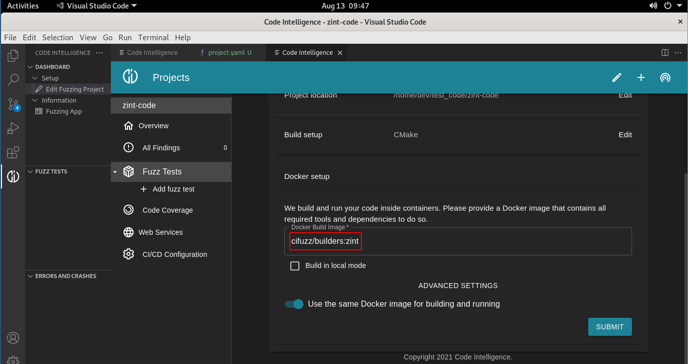 After clicking "Submit" the project will be initialized and compiled. CI-Fuzz automatically adds various instrumentations to the build process to measure the code coverage and detect vulnerabilities.

Next, you have to choose which function to fuzz. Since ZINT is a barcode generator that encodes strings into barcodes, the "ZBarcode_Encode" function is an obvious choice. As arguments, it takes the kind of barcode to be generated, the data to be encoded as a buffer, and the length of the buffer. This makes it optimal for fuzzing.

Use the search to locate the "ZBarcide_Encode" function in the source code. To create a fuzz test, click the "Fuzz this function" button above the function name. 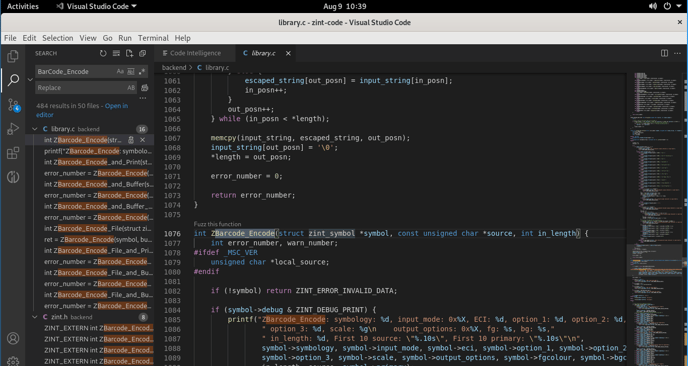 A code template is generated automatically, containing all necessary includes and preconfigured with the necessary compiler flags.

You only have to add some code that correctly calls the function under test and takes care of creating and deleting the required data structures. 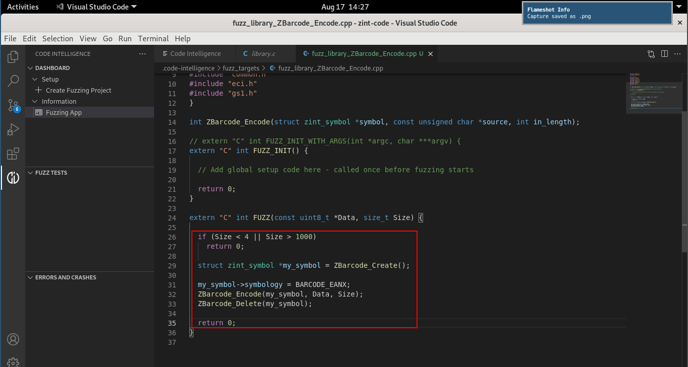 Also, you can find this code in the file ~/materials/zint-fuzz-test. Copy this code into the template as shown above.

Now you can run the fuzz test by clicking the yellow "Run" button. 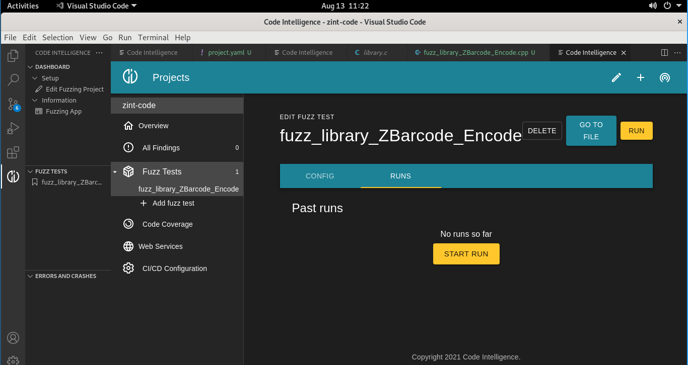 After starting the test, the fuzz test is compiled and executed multiple thousand times per second. 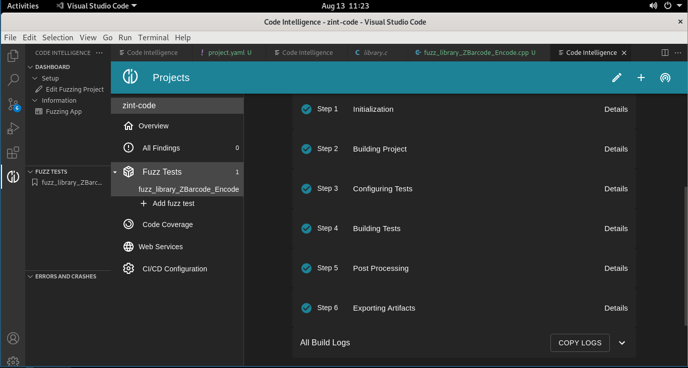 After only a few seconds, the fuzzer stops and shows that a finding was discovered. Click on the bug symbol to view the details of the finding. 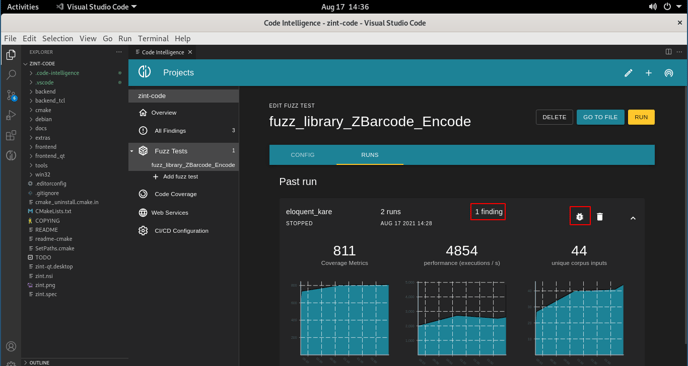 The summary tab shows which line of code triggered the finding and the corresponding input. 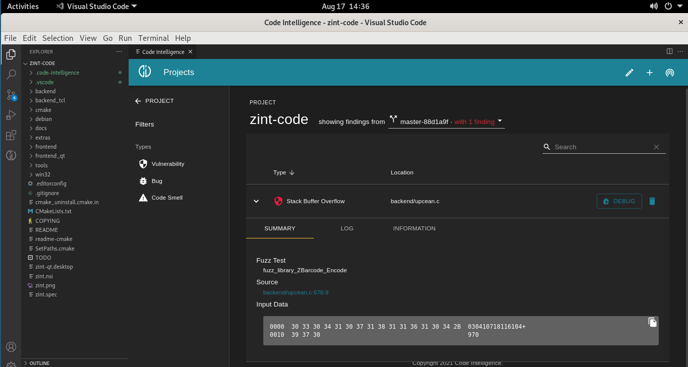 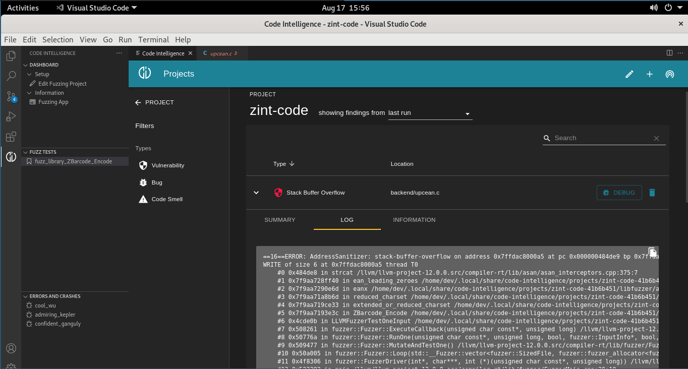 To get more details, switch to the logs tab. You can also start a debugger to analyze the found stack buffer overflow by clicking the "Debug" button. This starts the debugger with the discovered crashing input and preconfigured breakpoints. 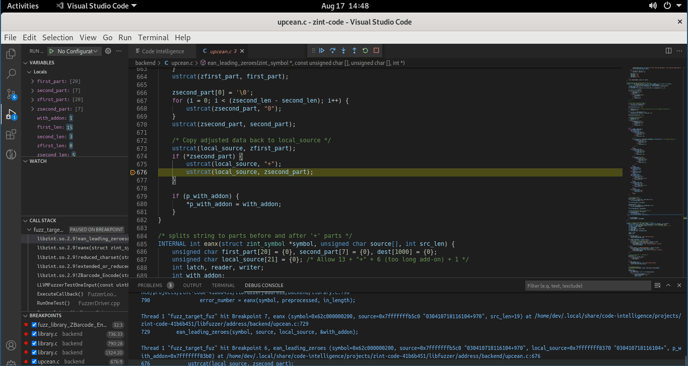